Heather At "Card Services" Gets Gagged

are ended. After years of complaining about DNC violations by "Card Services" et al, the FTC has taken action.

That's one scammer out of action, for a while.
Posted by Nitecruzr at 1:18 PM No comments:

I forgot my password, and the email address changed a couple years ago.

Bravo, Blogger!
Posted by Nitecruzr at 11:03 AM No comments:

OK, due to some demand, I am starting a referential diagnostic guide, for troubleshooting problems with custom domains. It's going to be a bit high level for a while, and look like an outline (Cliff's Notes?) while I develop it. After I have a while to fill in the holes, I'll make it pretty.

So be patient, and let me get the top level issues stated, first. Ask in Blogger Help Forum, for help using the procedures.
Posted by Nitecruzr at 11:10 AM No comments:

and a few days, I got a strange email - from Jordan, at Blogger Support.

You have helped us out tremendously with your Blogger expertise, personal knowledge base and help articles, and support for the members of the Help Group. We really do appreciate what you do - as does everyone in the group!

And that is where the Blog*Star program started for me.

Some other day, I'll go into how I got started originally, helping in the Help Group.

It's been a strange, and wonderful, 3 years. Both Jordan, and later Gatsby, have been great contacts, and have provided major assets to the Blog*Star program.
Posted by Nitecruzr at 8:32 AM No comments:

I'm a citizen of the USA, and I speak English, as do most of the readers of my blogs. But, not everybody in the world community speaks English. The English language not only doesn't have a majority in the community, it's not even the single most commonly spoken language. WikiPedia shows English in 4th place, behind Mandarin Chinese, Hindu / Urdu, and Spanish.

If I'm going to reach out into the world, I have to speak other languages in my blogs.

Almost two years ago, I started doing just that, when I had an immediate need to make my post Phishing Attack Warning Messages From Kaspersky Internet Security available in Russian. I found a publicly available front end for the Google Translator, enhanced the front end design, and published it as my Cumulus Translator Bar.

Working with Roberto of RobertosBlogs Dot Net, we now have a translator bar that uses the Google Translator, and supports any of 54 world languages. 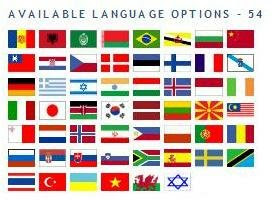 Check out the install instructions for the English Translator Bar, here.

We're hoping to make additional languages available, as demand and resources exist.
Now, we provide translation for blogs not published in English, as well.
Posted by Nitecruzr at 3:41 PM 1 comment:

Between that change, and the overall styling and content change made to the navbar, made earlier this month, I see a major improvement in making BlogSpot a place where people of all ages can surf, safely.
Posted by Nitecruzr at 7:25 AM No comments:

Members Of The Blogger Community Have To Protect Themselves

If we're going to have blogs, have them provided for us in perpetuity, and enjoy publishing anonymously (at our discretion), we have to maintain control of our blogs. Blogger can't provide password resets gratuitously or repeatedly. Our keys to our blogs are our responsibility.

Please, exercise that responsibility.
Posted by Nitecruzr at 7:57 AM No comments: